Enter for a chance to Win a Free Vacation!

Choose ONE of the options below.

Trieste is an interesting city and a flourishing center of trade and commerce. It was a literary and cultural center in the 20th century, and the town has Viennese influence and style - along with grand squares, palazzi and churches. The main square, Piazza dell'Unita d'Italia, has Viennese cafes, Palazzo del Governo, and Palazzo del Comune with its clock tower. All of these buildings were built in the 19th century. The promenade is a worth a stroll. Upper town, Colle di San Giusto - with its terrific views - has beautiful Castello di San Giusto and its musuem at the top of the hill, Piazza Cattedrale. Basilica di San Giusto is two churches in several styles, including Roman and Byzantine, with frescoes depicting San Giusto (the town's patron saint), mosaics, and the lovely rose window. The civic museum here has art, religious items and historical items inside. Orto Lapidario displays pottery and statues. Visit Civico Museo Revoltella. Stop at Castello di Miramare and her gardens. Villa Opicina has a wonderful belvedere and views, and Grotta Gigante is an amazing walkable cave museum.

Zadar's many promenadors on the shore have a feeling they are on board the starboards of which are being laved by the waves carried by the warm zephyrus. Zadar is a town on the seaside. It is floating on the reef and closing from times a gap between itself and land, a harbor which was a pulse of its history. All the maritime and land ways led to this harbour and on their crossings the ancient marketplace was made, which became the origin of the Town, the very springwell of its life.

Pag - Island of lace and salt

Hvar Island is a vineyard-and-olive-grove-covered island surrounded by a translucent cobalt sea. A particularly rich cultural and monumental heritage complements its natural and unique beauty. The island was one of the greatest centers of early Croatian literature, architecture, sculpture, painting and music. Called the Croatian Madeira, Hvar is said to receive more hours of sunshine than anywhere else in the country. Other sights include Hvar Theater - founded in 1612 and the oldest community theater in Europe; Crvene Stijene (Red Rocks) - an unusual and picturesque natural phenomenon; Pakleni Otoci - a beautiful and unique group of about 20 charming islets situated opposite the town of Hvar.

Hvar: The Island of Hvar - 4 hours

Half day wine tour on Hvar

Classed as a world heritage treasure by UNESCO, Dubrovnik is a place of ancient streets lined with stone palaces, Venetian-style buildings and bell towers. The city is enclosed by stone walls, and the highlight is a leisurely walk atop these massive walls for a great view of the city and the sea. Entering Dubrovnik, you are greeted by an impressive pedestrian promenade, the Placa, which extends before you all the way to the clock tower at the other end of town. The Orlando Tower here is a favorite meeting place. Just inside the city walls near the Pile Gate is the Franciscan Monastery housing the third-oldest functioning pharmacy in Europe, operating since 1391. For a fantastic panorama of the city, take a cable car ride to the summit of the 1,340-foot Mount Srdj.

Buggy tour and sightseing of Dubrovnik

Split, the largest Croatian city on the Adriatic coast, is the heart of Dalmatia. The old town is built around the harbor on the south side of a high peninsula sheltered from the open sea by many islands. Split achieved fame when the Roman emperor Diocletian (245-313), noted for his persecution of early Christians, had his retirement palace built here from 295 to 305. Since 1945 Split has grown into a major industrial city with large apartment-block housing areas. Much of old Split remains, however, and this combined with its exuberant nature makes it one of the most fascinating cities in Europe.

Sightseeing of Split and Trogir

Opatija, this elegant tourist destination, lies at the center of the Riviera with the longest tradition of tourism in Croatia. The very attractive geographic position, enabling its warm seas to be quickly reached from many cities in Central Europe, lush green scenery and pleasant climate were some of the main reasons for its beginning and the quick development of its tourism at the end of the 19th century. Well-maintained public gardens, the illuminated 12-km-long coastal promenade known as the "Lungomare", well-kept beaches and fountains provide a stunning backdrop for the villas and hotels that cater comfortably for up to 6,000 guests. 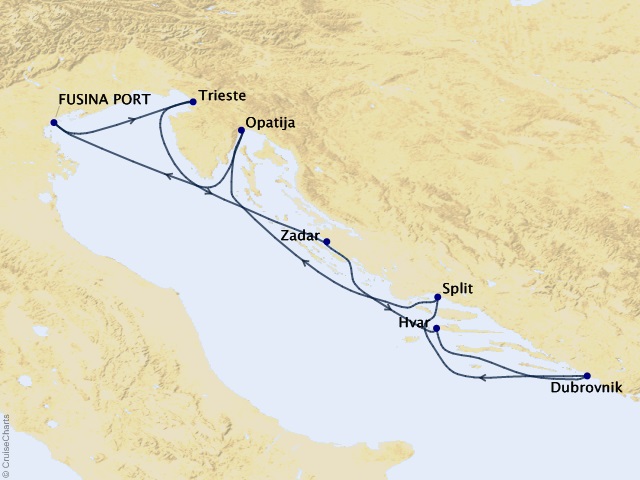 Itinerary subject to change without notice. Please confirm itinerary at time of booking.

Cruise Only Fares are in US dollars, per person, based on double occupancy.

All fares are quoted in US Dollars.

All prices per person and in USD unless otherwise stated.
Offer ID:
1436555

Reference this number when contacting our agency so we may better serve you. Also keeping this number handy will allow you to locate this document again quickly.

Information and pricing is subject to change without notice. While we do our very best to ensure that information and pricing appearing in this website is complete and accurate, we cannot be responsible for incomplete and inaccurate representations, which may or may not be under our control. In the event of a pricing error, misrepresentation or omission, we reserve the right to adjust the pricing or make any other corrections.